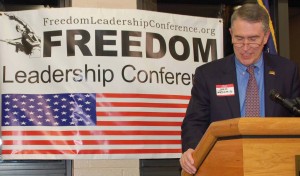 John Medaris spoke for Uniformed Services League at the Freedom Leadership Conference in 2013.

On March 27, 2013, Uniformed Services League co-sponsored the Freedom Leadership Conference in order to defend the most basic right to vote for uniformed American servicemen.  John Medaris delivered a statement as one of the conference speakers in which he raised these questions (full text under “Statements” of this website):

“Why are they ignoring the law that requires them to establish facilities on military bases to help uniformed services personnel register to vote and cast absentee ballots in elections?”

John Medaris provides high quality, discount real estate services to current and former uniformed service members through his Exit-Advantage Realty office in Northern Virginia.  He has donated the use of his office for several of the Freedom Leadership Conferences and also been a speaker. 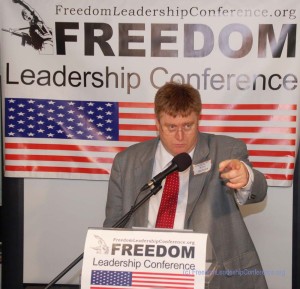 Uniformed Services League Executive Director Ronald Wilcox has spoken out for servicemen on many occasions including at the May 15, 2015 Freedom Leadership Conference in Northern Virginia.

The Uniformed Services League Executive Director, who has spoken in our behalf at several of the annual and more recently monthly Freedom Leadership Conferences when they have been held in southern California, Miami, Florida, Panama City, Panama, Thurmont, Maryland and Northern Virginia, has spoken out for uniformed servicemen as far back as 2008 and earlier.  In a letter to Congresswoman Ileana Ros-Lehtinen of May 15, 2008, he said,

“The International Criminal Court’s stated purpose can too easily be subverted into making of it a new tool for those who hate our country or our policies.  We fear that such zealots will very likely attempt to put American servicemen on trial for partisan or anti-American purposes, facing hostile judges, while subverting justice and constitutional law principles firmly rooted in the American tradition.” 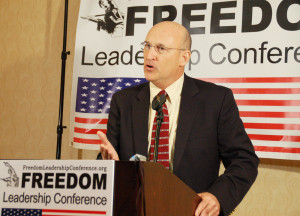 Tim Hanigan spent 22 years in the military, retiring as a Lt. Colonel, USMC.  He spoke at the October 17, 2013 Freedom Leadership Conference at the Fairfax Marriott Hotel at Fair Oaks, VA, in behalf of Uniformed Services League.

Very often, those who are supposed to follow an Officer know if you are asking them to do something not is not in the best interest of the military, the country, or the mission.  They can tell when there is a conflict between their own core values they have been taught and what they are asked to do.

Your “followers” in the military are willing to put life and limb at stake to follow the orders of their officers – strategy, practices, and tactics such as not being allowed to have loaded weapons at embassies to name one example.  But sometimes the orders we are given by our leaders – in the military less often and in the civilian world more often, either make no sense, or else, are very much at odds with our core values.

If only everyone in America had these basic core values instilled both in officer-leaders of the U.S. military as well as the enlisted men who follow them the country would be better off, was the central focus of Colonel Hanigan’s remarks, very well received by attendees of the Freedom Leadership Conference.

If only those who say they wish to be our leaders as Mayors and legislators, Governors, Senators and Congressmen, as Judges and as our President, had the values taught to officers – don’t “fool with” (Marines use a different F word he said) your followers but work in their interest and to uphold our shared, core values.

Hannigan is the Managing Editor of the Fairfax Free Citizen and has been a regular attendee and supporter of the Freedom Leadership Conference monthly series.

Hannigan concluded his remarks by pointing to a future Uniformed Services League (USL) sponsored Freedom Leadership Conference at which U.S. Congressman Scott Perry (R-PA) will be the featured speaker.  Colonel Perry is also an active duty Colonel in the U.S. Army.  The conference will be focused on a “Salute to our Servicemen.”  To see and hear Lt. Colonel Hannigan’s brief remarks, go to https://youtu.be/YRqpI-MsSFY

(full text of some of these remarks are under “Statements” on this website).