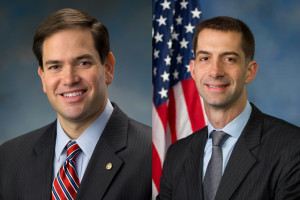 Senators Marco Rubio and Tom Cotton are leading an effort to persuade the new GOP Senate and GOP controlled House to cut the Sequester Cuts in the military budget, so hurtful to America’s armed services.

It is one of the areas that the Tea Party is somewhat divided, but all serious national defense conservatives are united.  America cannot afford to keep the damn “Sequester Cuts” from nearly four years ago.  The new GOP Congress should repeal the Sequester Cuts and restore a strong defense budget, stop hurting those who wear America’s uniform in the Army, Marines, Air Force, Navy, Coast Guard and National Guard.

Congress needs to cut wasteful and counter-productive, economy-ruining, work-ethic destroying government programs starting with ObamaCare and so many others.  Never mind all this tax increase crap.  Use the funds saved from eliminating stupid government programs that do not work to achieve their claimed purpose, to restore a strong defense.  Don’t send Americans into combat situations ever again with anything less than complete superiority with weapons systems, training, manpower and strategy.

Republicans, you asked for majorities to do this and now we demand you start doing it.  Cut Sequester Cuts of uniformed services.  Enough is enough.  As Obama used to say before he lost the recent election, “elections have consequences.”

Before I tell you about two United States Senators – Marco Rubio and a brand new one, Tom Cotton – who are leading the effort to repeal these “Sequester Cuts of National Defense” which are hurting our uniformed services so badly these past four years, first the background.

You will recall that there was an impasse in Congress nearly four years ago.  The liberals wanted to raise taxes AND cut the national defense budget.  What else is new?

The conservatives, especially the ones supported most strongly by the Tea Party, wanted to cut the spending, not raise taxes, and except for a few libertarians, most elected with Tea Party and conservative support, wanted to strengthen, not slash, the national security budget.

The liberals knew if there was an impasse that could not be resolved, and Congress could not pass a budget, despite the fact that Democrats controlled Congress and the Presidency, the country would blame Republicans.

So to finish up this quick and very timely history lesson, how did they resolve the impasse nearly four years ago?  Many of the conservatives gave in to the GOP moderates who went along with the Democrat majority, to pass the “Sequester Cuts.”

That means that if a “super committee” created by Congress could not reach agreement on the tax increase method of balancing the budget versus the spending cut method, then an “across the boards” cut in spending would take place INCLUDING MASSIVE CUTS IN THE NATIONAL DEFENSE BUDGET.  You may recall how this ended up four years ago.

Very literally, it was a decades long dream come true for the liberal-left in America and their allies all around the world who HATE AMERICA, hate America’s military, and wanted to see our national defense capability crippled.

Not since the days of the draconian cuts of the Clinton years, where Army Drill instructors did not have ammunition to have recruits in basic training practice with, when there weren’t enough Chiefs (Chief Petty Officers) on American Aircraft carriers at Norfolk Navy base to allow them to set sail, when most of our 10 U.S. Army Divisions were not rated ‘combat ready” and when all branches of service were under strength and under prepared for battle, have we seen such a disaster.

Today Congress with a majority GOP in both the Senate and House is again debating whether to continue or stop the Sequester Tax Cuts which they enacted at the request of President Obama nearly four years ago.

Back four years ago, some voices in the Tea Party celebrated the “Sequester Tax Cuts.”  That’s because some of them are actually anti-defense libertarians, and some others, are overly influenced by them.  So the Tea Party voice was either neutralized or compromised.  How about today?  Will conservatives come to realize that we need to make a strong stand to strengthen and restore our military?

This in from one of my favorite information sources, the Facebook page of the Republican Security Council.  I strongly urge you to read this and to check out their Facebook page.

You can read the full article at: http://www.cnn.com/2015/03/26/opinions/rubio-cotton-defense-cuts/index.html

LEATHERNECK posts here & at Facebook as Dylan Laslo where they found me ranting & raving about national defense issues & the sad state of affairs under President Obama, and asked me to put them here & feel free to expand.  They asked for it.  You can find my rants on Facebook on my page, and at Northern Virginia Tea Party & at Republican Security Council.  I don’t agree with everything posted by the leaders of those two groups, but enough so that I am comfortable at both places and enough to recommend them to you.  If more of us who served the country in uniform paid more attention to what the politicians are doing and then voted for what is best for America at election time, Obama would never have been elected President.  It is a dumb idea to think we should leave politics to the politicians.  It’s why the country is in the trouble it is.  If you are now or were in the military I hope you will get involved, pay better attention and don’t ever miss a chance to vote.  And I hope you don’t ever vote for any politician who votes to weaken the national security of this country.  It’s a matter of life and death.

This entry was posted in Leatherneck. Bookmark the permalink.